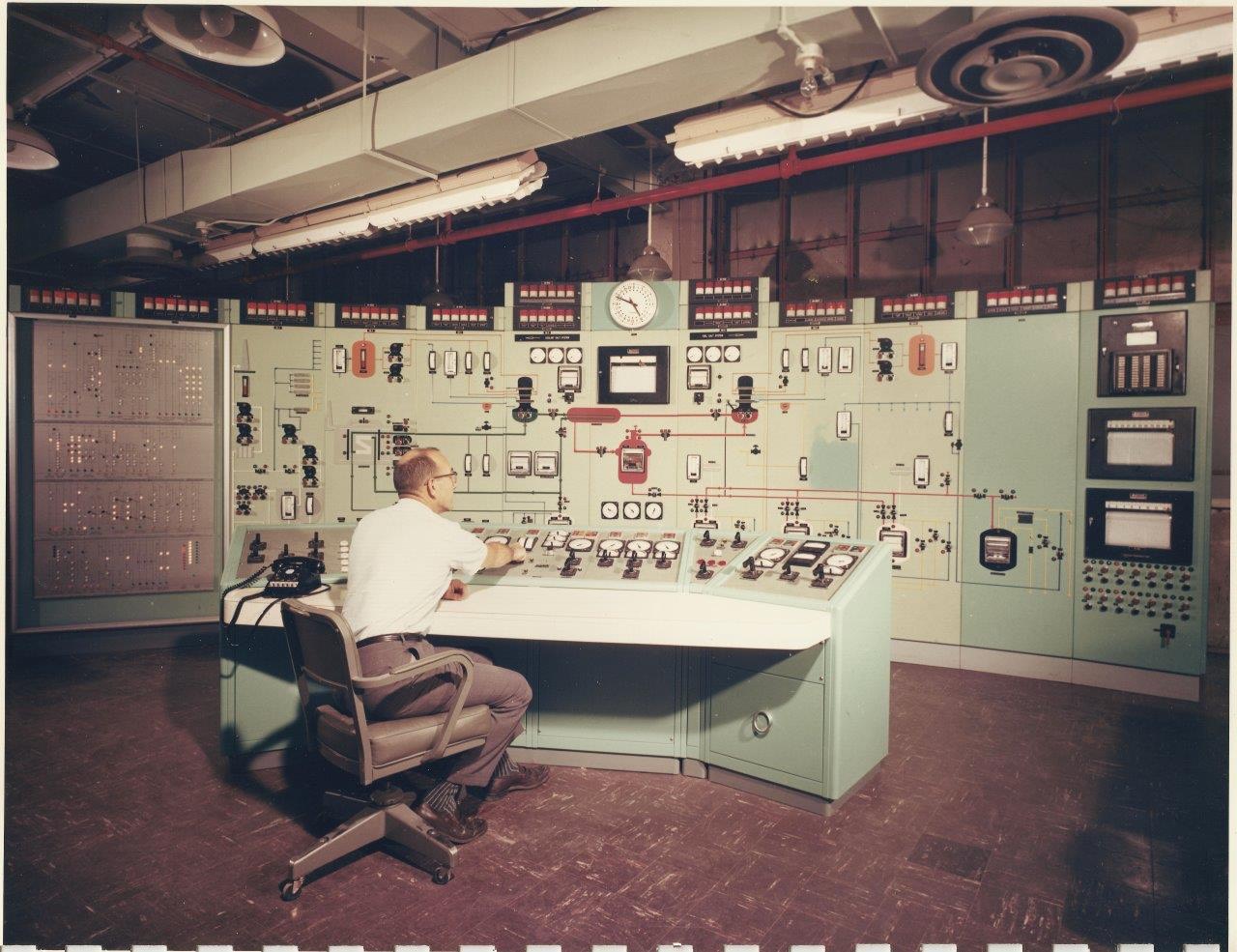 Above: a 1960s (generation one) molten salt reactor plant, the MSRE

Most nuclear power stations are essentially steam turbines. Indeed, they are often considered in the same breath as coal, shale gas, and oil fueled power stations due to the fuel being used to heat (or, sometimes, boil) water. All currently built nuclear power stations use water as a working fluid, but some designs use carbon dioxide, for higher thermal efficiency. This article will focus on salt-based reactors, due to their attractive features over both light-water reactors and liquid-metal cooled fast reactors. 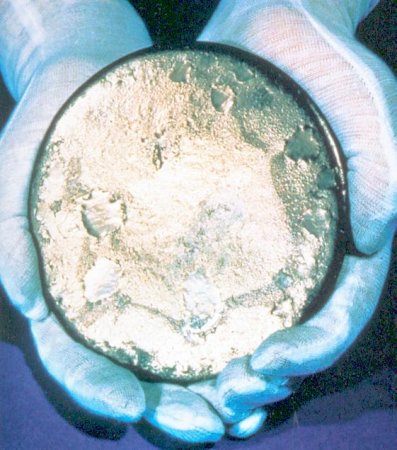 Uranium is a heavy element. In fact, for a long time, it was thought of as the heaviest naturally occurring element. Later discoveries showed that neptunium and plutonium also occur naturally, but that's not so important right now. Uranium is very heavy, and as such is nearly tearing itself apart because heavier atoms can have less neutrons—which act a bit like glue—than protons (and more radioactive, although this is true of any atom with too many neutrons, including hydrogen-3), there are two types of uranium that only need a small push (in artificial reactors, a neutron) to break apart and release energy. These are uranium-233 and uranium-235, both of which have been used, but uranium-235 is preferred for solid-fueled reactors.

The amount of fuel required to sustain a chain reaction is called the critical mass, where criticality refers to one reaction leading to one other reaction.

Although water boils at 212 degrees Fahrenheit (100 degrees centigrade), typical reactor operation temperature exceeds 500 degrees F. Because of this, water is pressurised to 150 times the sea-level atmosphere. This prevents the water from boiling into steam, since steam takes up 1,000 times the volume of liquid water. Fluoride reactors avoid this by using substances with high boiling points, typically LiF₂BeF₄ZrF₄, which has a very high boiling point (700 degrees Fahrenheit). Low core pressure at such high temperatures makes fluoride reactors a very attractive alternative on its own, but with liquid fuels the uranium is burned much more efficiently.

In a pressurized water reactor, uranium fuel is a solid, oxidized rod with chemical formula UO₂, uranium dioxide. However, solid fuel poses many problems. After a year in the reactor, despite still being 96% fuel, the fuel rod is taken out, and for a very good reason—the fuel rod swells and poses a hazard to the reactor itself. Liquid fuels allow all of that unfissioned potential to be used, and also allows for thorium breeding, creating new uranium from the more common (by four times) thorium reserves, which we currently throw away as "worthless" mining waste.

Typically, like in PWR and BWR, the uranium fissioning heats the water past normal boiling temperature. This water is run past a second loop of water, which boils into steam to drive a turbine. This steam gets sent through a condenser, before looping back into the heat transfer. This system generates one gigawatt of electricity on average. However, the salt fuel allows for gas turbines as well, most often supercritical CO₂ but nitrogen has also been proposed as a working fluid for such a turbine. 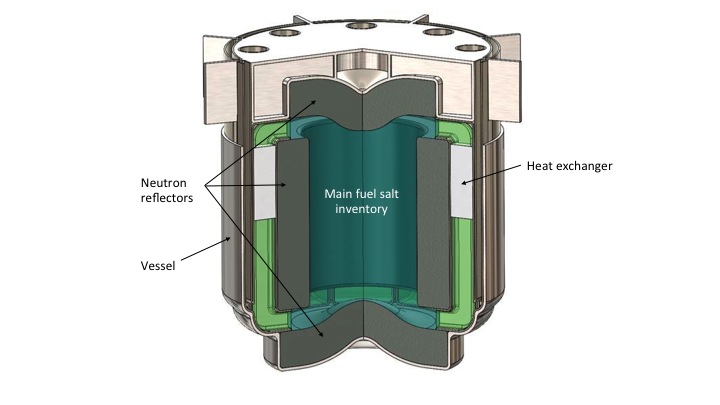 Molten salts are a variety of materials with a variety of properties. Fluorides typically have high melting and boiling points with 1,000 degrees centigrade in between the two, while chloride salts have moderate melting points. In addition, fluorides have better neutron moderating properties compared to the relatively invisible to neutrons chlorides. This restricts fluoride reactors to being thermal spectrum only, and chloride reactors almost always fast-spectrum, although it is possible for a thermal chloride reactor to be produced.

In addition, chloride reactors have more proliferation resistance. Because cesium and xenon chloride are chemically and electrically similar to plutonium chloride, the reactor is extremely proliferation resistant. If anyone wanted to remove the fuel from the reactor for the plutonium-239, the radioactivity from the cesium and xenon chloride and iodide would prevent them creating such a weapon due to being existence impaired. Since chloride reactors don't have the graphite moderator of a fluoride reactor (a fluoride reactor without graphite moderator would be epi-thermal, somewhere in between thermal and fast spectrum), they produce less radioactive waste, as neutrons can activate graphite rods very easily. They can use any fuel available, as well, due to their fast spectrum properties; thorium fuels, uranium and plutonium fuels, depleted uranium, spent nuclear fuels from PWR/BWRs, weapons heads, larger actinides, among others, with the same burnup rate of nearly 100%.

See this table for more info:

The BWR is the type of reactor most favoured by countries without nuclear navies, the PWR is otherwise used when there are military uses for the technology due to the somewhat higher power output per cubic meter. It has been described as the civilian's water-cooled reactor, although PWRs and BWRs are in most respects very similar.

There exists a third design, which is broadly similar, but when looked at closely shows much difference. The CANDU (Canada, hydrogen-2, uranium) reactor, instead of using hydrogen with one neutron, uses hydrogen with two. This was a rare form of water in the 1950s and '60s, but nowadays is more common, with this as its primary use. Because the hydrogen in the water already has a neutron, it keeps bonded even when neutrons collide with it. As such, it can use unenriched uranium fuel because the hydrogen isn't capturing enough neutrons to raise the critical mass.

Because of this, CANDU reactors remove the need for enriched fuel, meaning that from a proliferation standpoint CANDUs are that much safer. However, proliferation is mostly a non-issue in commercial power stations anyway.

Not all military uses are for atomic weapons.

In fact, both the Navy and Army use reactors for power uses, on bases both domestically, abroad, and at sea. The biggest use of nuclear power nowadays in the U.S. Military is in naval reactors (which use 50% enriched uranium, unique in reactors), which are very numerous. Nuclear submarines mostly replaced gas submarines in the 1970s, and while nowadays there's a mixture of both, nuclear submarines with conventional missiles are here to stay.

As hinted at before, naval reactors are all PWR types, which is alright; at such small scales (the submarine intermediate reactor was sixty megawatts of power) the PWR is failsafe. The potential issues only come to light in larger designs - 300 MWe and above.

Ultimately, even the military nuclear reactors are fairly safe from proliferation.